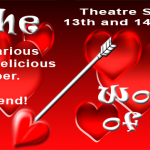 Pastiche and Worst Day of My Life Theatre Supper Evening

Pastiche – Sir Peter, has planned a dinner for two. His companion is Viola, a young chorus girl. But he’s forgotten it’s his wedding anniversary– his wife, Lady Alexandra, comes home early and aided by the butler, Medford, turns Sir Peter’s evening into a shambles….

Worst Day of My Life – Charlie Brown’s day in hospital begins very well. His devoted wife is at his bedside; a scene of conjugal bliss, that is until another female visitor arrives. When she reveals that she is also Mrs Brown, Charlie’s got some explaining to do. As his previously secret life is hilariously disentangled, a third female visitor arrives, also claiming to be Mrs Brown. You’d think Charlie’s day couldn’t get much worse – but it does.